You are here
Home > Clinical > A New Approach to Subjective Refraction 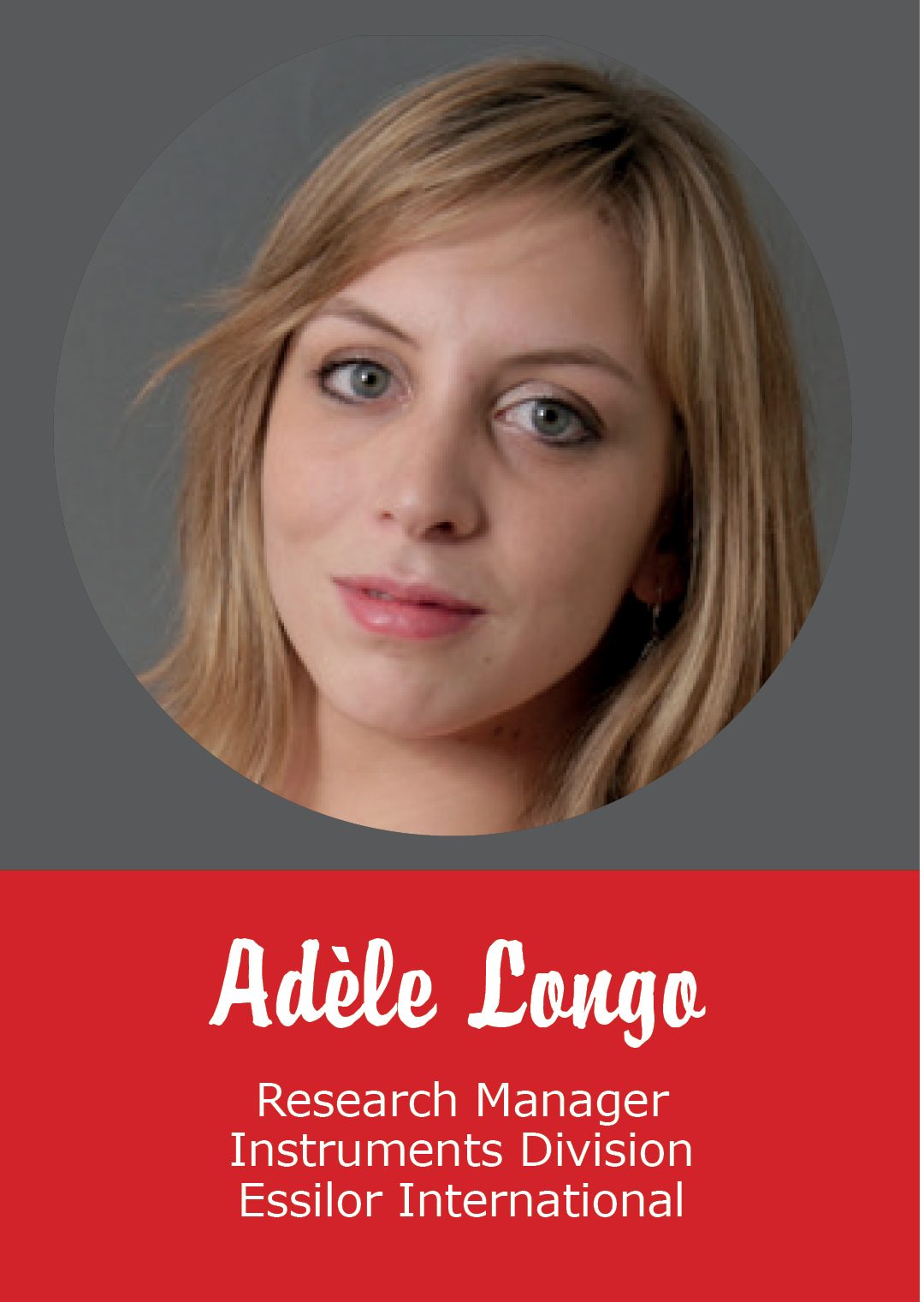 Adèle Longo earned her optometrist certification after completing a programme at the Institut des Sciences de la Vision in Saint Etienne, France. In 2011, she joined Essilor’s Research and Development department, working in the low-vision research centre at the Institut de la Vision in Paris to improve functional evaluations of patients with low vision. She currently works at Essilor Instruments as the director of an optometry research team while also serving as a consultant for centres for the visually impaired and training establishments. 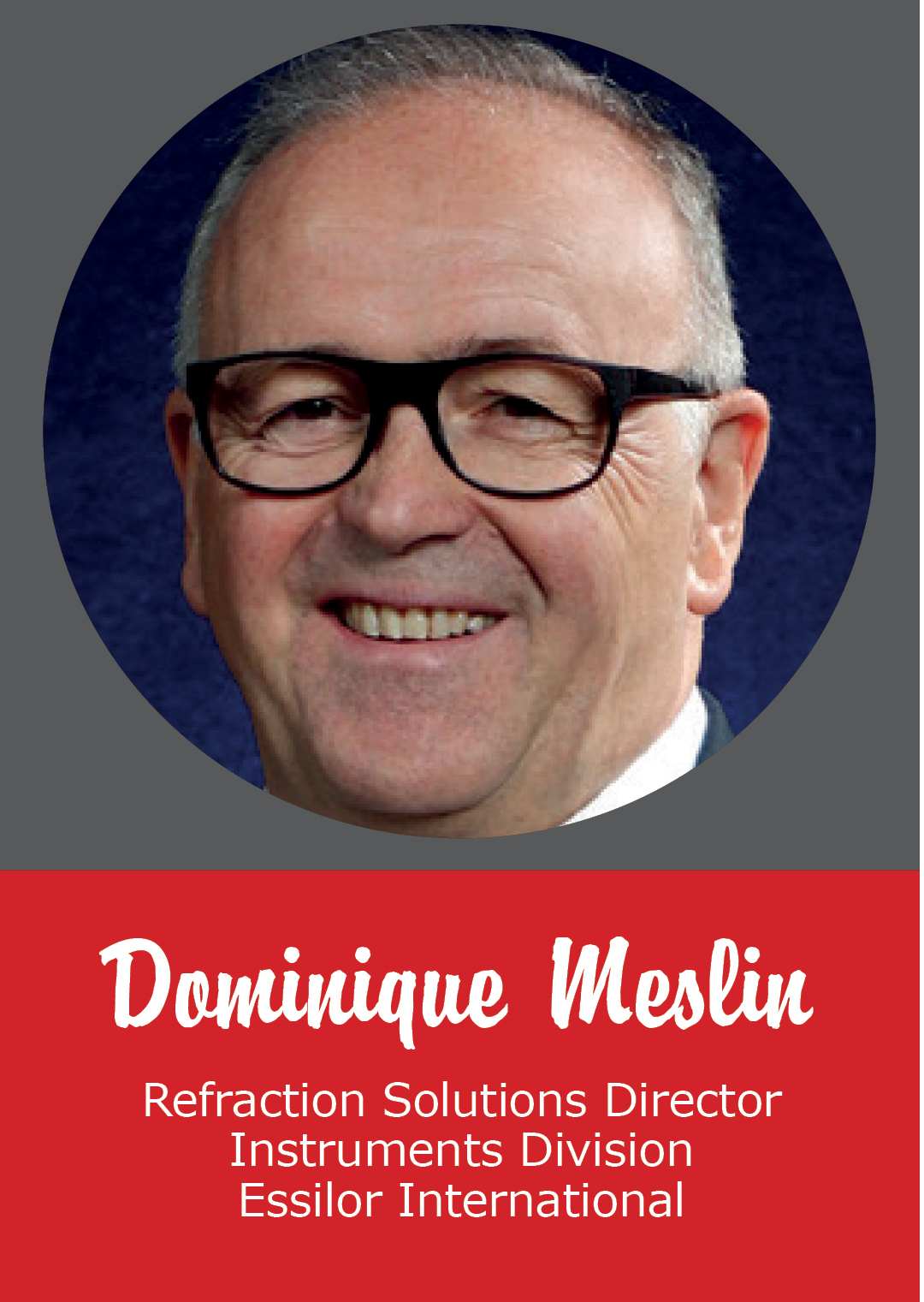 Trained in France as an optician and optometrist, Dominique has spent the greater part of his career with Essilor. He started out in Research and Development, working on physiological optics studies, and then held several marketing and communications positions for Essilor International in France and also in the US. Dominique was the director of the Essilor Academy Europe for more than 10 years and subsequently oversaw Professional Affairs for Essilor Europe. He is now in charge of the new Refraction
Solutions for the Instruments Division of Essilor International. Throughout his career Dominique has conducted many training seminars for eye care practitioners. He is also the author of several scientific papers and many technical Essilor publications, including the “Ophthalmic Optics Files” series.

The advent of phoropters offering continuous power changes has made new subjective refraction techniques possible. One of them consists of determining a patient’s refraction using semi-automated algorithms that simultaneously change sphere, cylinder and axis in increments of variable dimension.* This article provides an overview of this technique’s general principles and shows how it can make both determining refraction easier and achieve more accurate results.

The subjective refraction techniques that most practitioners use today date back to the early 20th century and have changed very little since then. The cross-cylinder technique for determining the cylinder was proposed by American ophthalmologist Edward Jackson in 1907, while the “fogging” technique derives from work published by English physician William Swaine in 1925 on the
relationship between defocus and visual acuity.(1) Only the way of presenting the lenses has been made easier for the practitioner. The trial frame used since the 18th century gave way to the manual phoropter around 1930, which in turn was replaced by the automated phoropter shortly before the early 21st century. Today, refraction all too often consists of a simple subjective verification of the objective refraction formula obtained from the autorefractometer, using lenses presented in increments no smaller than 0.25 D – the same increments that have been used for the past 150 years.

Although traditional phoropters are useful for determining the three refraction components (sphere power, cylinder power and cylinder axis), they impose a limitation: these components must be determined separately, and no simultaneous and instantaneous action involving all three can be performed despite the fact they are interrelated. This limits the way precise refraction measurements can be obtained. 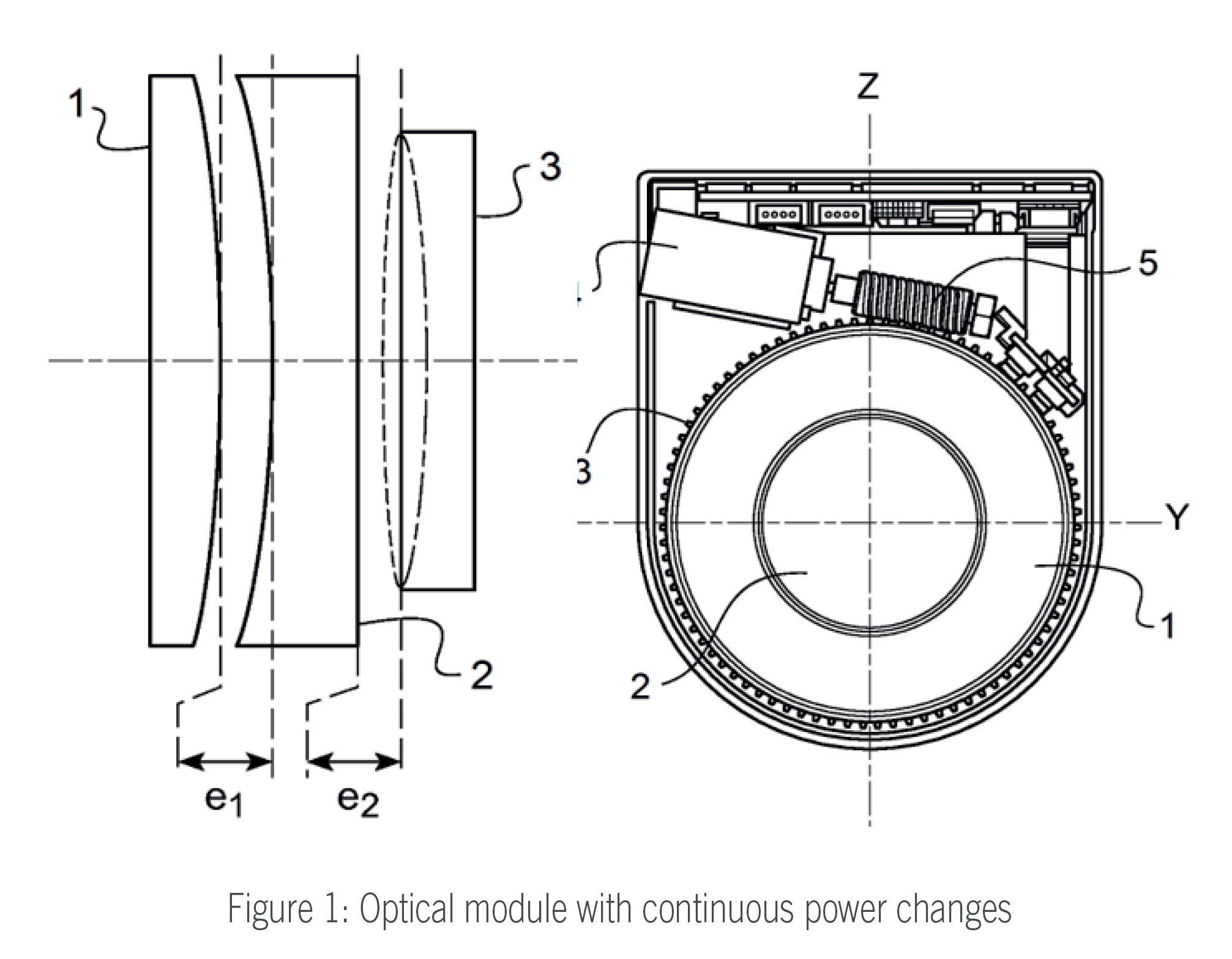 However, recent advances in instrumental optics and optoelectronics technology have made it possible to create systems that can change powers in much smaller increments, making the switch from one power to another a lot smoother for the patient. An optical module composed of a flexible spherical lens and two rotating cylindrical lenses controlled by micromotors has been developed (Figure 1).

* This new refraction approach is offered by Essilor’s Vision-R 800 phoropter and integrated into the AVATM (Advanced Vision Accuracy) concept associated with it.

This method is taught and practiced throughout the world and has been covered in many publications.(2) Any refraction is traditionally expressed with reference to its three components, referred to as “polar coordinates”: sphere power, cylinder power and cylinder axis (the first two are expressed in dioptres and the third in degrees). For greater consistency, any optical correction can also be formulated with reference to three dioptric components:

These three refraction components, or “Cartesian coordinates”, are all expressed in dioptres. Knowing both the J0° and J45° components makes it possible to determine the cylinder’s power and axis. Any refraction value can then be represented by plotting its three coordinates in a standardised orthonormal threedimensional reference system called the “Dioptric Space”. Changes in the refraction can then be followed over the course of the examination. It soon becomes clear that the traditional way of determining refraction is quite indirect (Figure 2). It involves determining the various refraction components in different directions and includes several regressions. 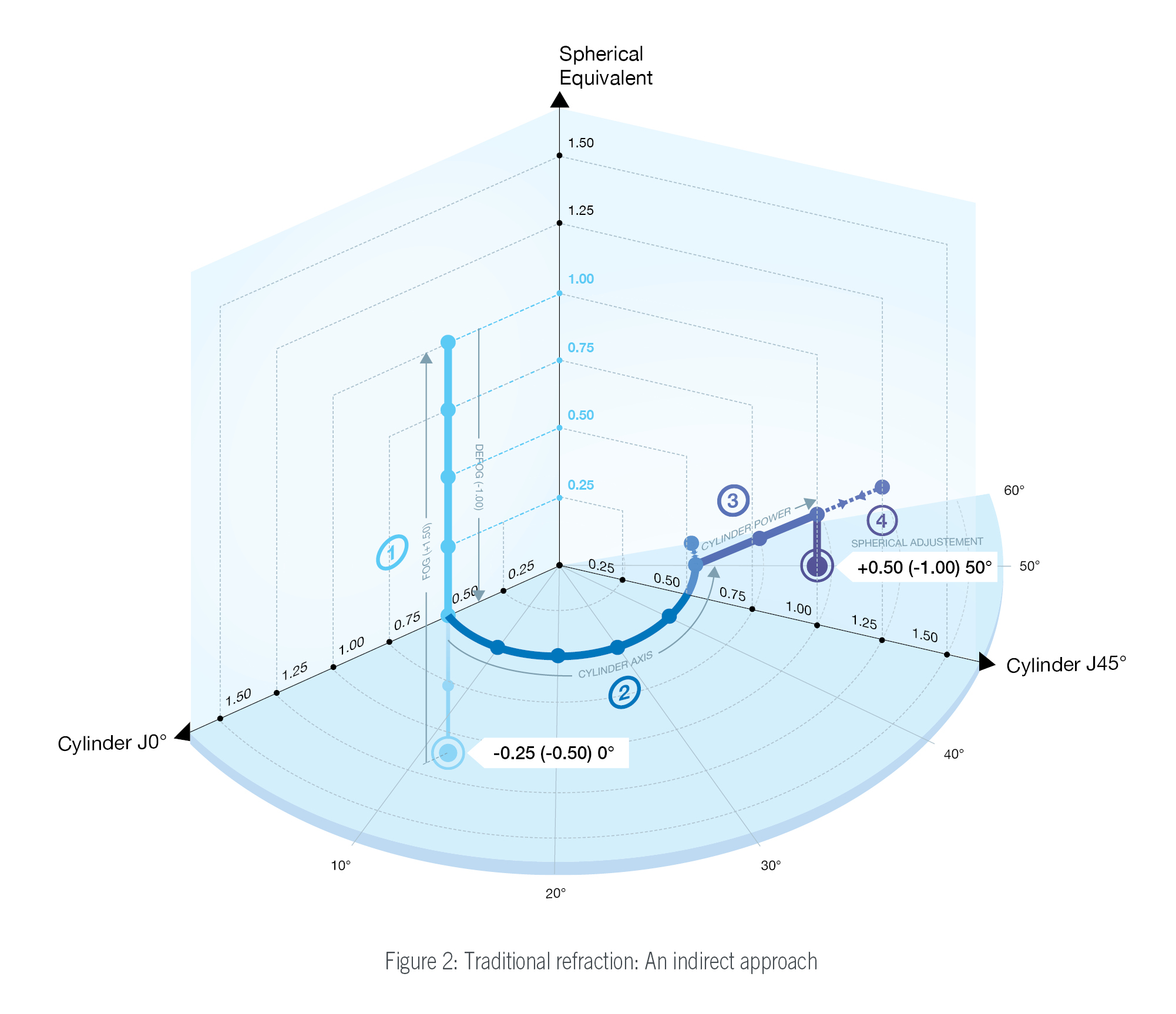 There are four steps:

As this makes clear, the traditional refraction examination resembles a continually interrupted search going off in different directions.

An optical module offering continuous power changes allows for simultaneous adjustments to sphere, axis and cylinder, making it feasible to determine the patient’s refraction using a more direct approach. A series of tests using semi-automated algorithms in which the patient’s successive answers are recorded enable the practitioner to rapidly determine the refraction and achieve more precise results. A Digital Infinite RefractionTM examination proceeds as described below.

First, a new type of fogging technique is used to encourage a relaxation of the patient’s accommodation response. Two semi-automated algorithms are involved, one defining the fog level for the patient’s vision and the other effecting a rapid three-step defogging. Unlike with the traditional technique, which involves placing a fogging plus power in front of the patient’s eye and measuring its effects on visual acuity, the fogging algorithm does the opposite: it defines the plus power level necessary to fog the patient’s vision to a given preselected level of visual acuity. To this
end, specific “vanish” optotypes (black letters with white borders on a grey background) are used – they blend into the image’s background and disappear when the desired blur level is reached.

The defogging is then carried out using an algorithm that calculates the necessary defogging increments for several selected visual acuity levels, depending on the patient’s answers and the known relationship between the visual acuity and the level of dioptric blur. This technique takes advantage of the optical module’s smooth increment change feature, defogging by increments of different sizes, calculated to a precision of 0.01 D. The practitioner can thus quickly and accurately determine the final sphere value, or in other words the maximum plus power giving the patient an
acuity of 1.0 (i.e. 10/10, 6/6 or 20/20). Next, the sphere value can be fine-tuned using a duochrome test or fixed cross-cylinder test, using a specific algorithm that looks for the exact value of the
sphere threshold using a psychometric method and gives the patient maximum visual acuity.

While with the traditional refraction technique the practitioner must determine the cylinder axis and the cylinder power separately and then adjust the sphere in three successive steps, Digital Infinite RefractionTM uses an algorithm that looks for these three components in a single sequence. It uses a vector refraction technique in which the cylinder power and cylinder axis change simultaneously, while the spherical equivalent power value is kept constant using 0.01 D increments. For the practitioner, the method is similar to determining the cylinder using the Jackson cross-cylinder technique. The difference is that the values of the sphere, axis and cylinder change simultaneously as the patient’s answers are recorded, and the process stops automatically
once the astigmatism has been evaluated with the desired precision and reliability. It should be noted that no cross cylinders are physically present in the phoropter but that optical effects of cross cylinders are generated in the optical module using calculations in combination with the existing correction. This technique enables us to determine the value of the cylinder in a way that is not
only more direct and more accurate but also more independent of the practitioner’s technique (Figure 3). 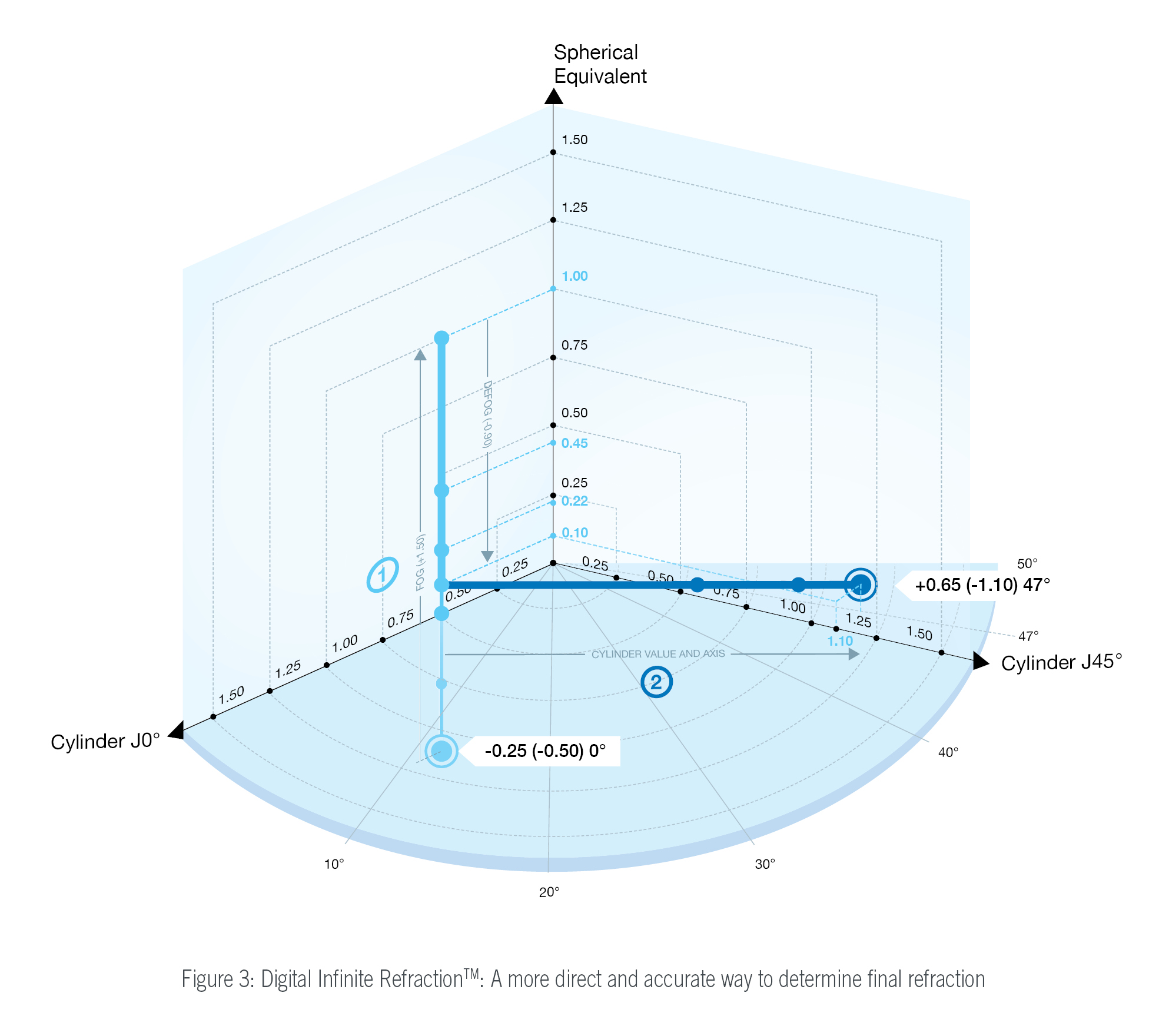 Once the refractions of each eye have been determined, the corrections of the right and left eyes must be balanced. The traditional technique consists of fogging both eyes slightly (for example, using two +0.50 D lenses), balancing the patient’s vision while blurred by adding more plus power to the eye that sees better and then removing the fogging lenses that were added. In some cases, perfect binocular balance cannot be achieved, and a choice must be made between the left and right eye, with priority usually going to the dominant one.

Digital Infinite RefractionTM uses a similar principle, except that the binocular balance is performed using a semi-automated algorithm and thus determined within 0.01 D, based on a calculation made once all of the patient’s answers have been integrated. The practitioner enters the answers and observes the patient’s preference inversions for the image seen by the right eye and the left eye until the algorithm stops.

Evaluating the near addition power

To determine the near addition power, Digital Infinite RefractionTM makes use of two algorithms: one makes it possible to approach the addition value in the absence of a starting addition, and the other allows for fine-tuning of the addition using the fixed crosscylinder method. These algorithms enable the practitioner to prescribe a near-vision addition that is both precise and without excess.

A psychometric method for measuring refraction

The goal for each test used in Digital Infinite RefractionTM is not to measure the value sought – like the red-green equality in the duochrome test or the blur equality between two cross-cylinder positions – but rather to focus on the value sought and generate inversions of the patient’s answers. A psychometric method for determining refraction thresholds is used, and every value sought is calculated statistically on the basis of all the patient’s answers.(4) Over the course of the refraction examination, the patient’s sensitivity to the dioptric changes is evaluated, and the variation increment is adapted accordingly: it is reduced if the patient is sensitive to them and increased if not. The patient can thus more easily distinguish the differences, and the refraction can be determined with greater precision.

Conclusion: Refraction does not mean Prescription!

Developments in phoropter technology now allow us to offer refraction-seeking algorithms that make measuring a patient’s subjective refraction more automated and objective. Although these techniques can certainly assist practitioners in their day-to-day work, they cannot replace a professional when it comes to prescribing a correction. In practice, the refraction can initially be determined using the algorithms available in the phoropter, making its result less dependent of the technique used and the practitioner’s experience. At a later stage, the prescription can be established on this basis, i.e. either the refraction found can be kept as is, or it can be modified according to the patient’s previous correction, vision needs, the way they will use their correction or the type of lenses or contact lenses they plan to wear.

Developments in refraction instrument technology can thus facilitate the practice of subjective refraction, helping make it more accurate. They can also foster a collaborative approach and more effective management of patients’ optical corrections.