On Monday, 9 September, SAB announced the finalists of the SAB Foundation Social Innovation and Disability Empowerment Awards – one within the medical industry.

Dr Daemon McClunan designed the OptiShunt, an implantable device that prevents blindness in glaucoma patients by draining excess fluid out of the eye while equalising pressure between the eye and the optic nerve.

According to Dr McClunan, glaucoma is an eye disease caused by a build-up of fluid, which causes raised pressure within the eye, damaging the optic nerve, and is one of the leading causes of blindness. “Glaucoma is most severe among people in rural areas and treatment involves multiple medications, numerous clinic visits and recurrent surgeries. Unfortunately, these procedures are expensive and not easily accessible”, says Dr McClunan. 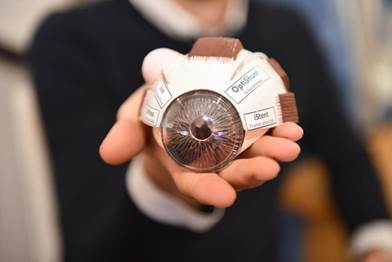 The device, invented by Dr McClunan in 2015, would assist glaucoma sufferers and patients facing irreversible blindness caused by glaucoma. The prototype has undergone engineering verification testing, bench testing, biocompatibility testing, animal testing and cadaver testing, which have validated the device’s function. First in man clinical trials have been approved by the South African Health Products Regulatory Authority and will commence later this year.

Existing devices used to manage glaucoma drain excess fluid using one of three pathways. All three of these pathways have inherent flaws, which makes the process of managing glaucoma ineffective to many patients. “The OptiShunt utilises a fourth, new way, called the retro-laminar pathway. This pathway allows immediate, predictable and long-term drainage of excess fluid as well as equalising pressure within the eye and retrolaminar spaces. My PhD research is demonstrating that this procedure holds the key to definitively preventing further progression of glaucoma, thus preventing blindness”, says Dr McClunan.

“Winning the SAB Foundation Disability Empowerment Award will provide us with the support we need to set the OptiShunt on a clear course to success. This is to radically disrupt the current treatment of glaucoma and make a big impact in the fight against global blindness”, says Dr McClunan.

Dr Daemon McClunan is a finalist in the SAB Foundation Social Innovation Awards.

Launched in 2016, the SAB Foundation Disability Empowerment Awards forms part of the SAB Foundation’s primary focus to ignite a culture of entrepreneurship in South Africa. The Disability Empowerment Awards are aimed at promoting social innovations that improve the quality of life for people with disabilities through assistive devices, training or employment.