Artificial Intelligence has made considerable in-roads in the business world. Just consider how it impacted on cameras, music industry, travel industry, etc. Today we have Uber who don’t own cars and Air BnB who don’t own property. The business landscape is changing as you are reading this.

Online retail, just a few short years ago, was regarded with much skepticism here in South Africa. However, today most people around us are making use of online retail in some shape or form. How will these winds of change impact on retail in Malls?

Cherelle Laubscher, a senior retail manager at GfK South Africa, said e-commerce in South Africa was still in its infancy compared to European markets, where a quarter of technical goods spending goes through digital channels. “However, growth in South Africa is strong and shows no signs of declining as bargain-seekers flock online to buy technical consumer goods like smartphones, IT, consumer electronics, and major home appliances,” said Laubscher. GfK South Africa’s point of sale data showed that the consumer perception that e-commerce prices were lower than in-store prices was accurate. More than two-thirds of the top 100 sellers among technical goods products in South Africa were cheaper through digital stores than at physical retailers.

South Africans are expected to spend R45.3bn on online shopping this year, up 19% from 2017. Sixty percent of that will go towards overseas retailers, leaving a projected R18bn for local sites, according to the fourth annual PayPal and Ipsos cross-border e-commerce report. Consumer shopping behaviour in over thirty-one markets was surveyed. The study reveals that more than 69% of adults who were active online in SA had shopped online in the past 12 months. The report predicts that online shopping will increase even more over the next twenty-four months. It is forecast to reach R61.9bn in 2020.

It begs the question: Will Malls reach their sell-by date as the primary shopping Meccas in South Africa?

A new Mall does not create new customers. All it does is displace an existing economy. The primary reason to set up in a Mall can only be that it will generate feet quicker than other locations. The problem is, that it has become common practice to abolish exclusivity and sign up 4 or 5 optometric practices in each Mall. So much for the motive of getting feet through the door.

Moreover, the landlord demands high rentals, based on mature Malls rentals from day one. The reality is that it will take the Mall 3-5 years to generate patronage that will even begin to justify the initial high rentals.

The day you sign a 5-year lease in a Mall you are basically taken hostage by the landlord. Should your business fail, your commitment in terms of the lease agreement does not go away. If your business is successful, over time you will find that salaries and rent will escalate faster than what your turn over will increase. Most practices will initially show growth year on year, but at some point, within the first ten years will flatten out and then turn over growth will become very hard. However, salaries and rent will continue to escalate and dramatically corrode the net profit. The benchmark for optometric practice is to pay around 10% rent (of turnover) and achieve 20% net profit. Eventually, this won’t be the case and will only get progressively worse.

The long trading hours demanded by Mall management is dreadful. Who would want to work the whole weekend and into the evening over December? This translates to salaries higher than industry benchmarks.

Out of control rent

A standard clause in a lease agreement states that the tenant will have the option to renew the lease, and in small print, at a market-related rental. This means that at the beginning of a new lease period, the landlord can hike the base lease by a huge amount, claiming that is what he can get for the premises. The tenant has no option but to accept because relocating the business at short notice is not possible. You are in effect a hostage!

To put the cost of rent to your business into perspective, here is an example:

Use the calculator to see where you will end up over time.  Click on the link and insert your own escalation and rent.

If this is what a landlord can make from 150 square meters, imagine what the income potential is of the whole Mall.

Will Malls reach a sell-by date?

According to research, indications are that online shopping will continue to grow. It can be safely assumed that it will also become more sophisticated and more convenient. The perception that online shopping is not reliable will melt away. Millennials, who are IT savvy, will move into higher income brackets with greater buying power, taking over from the older generation ahead of them, who is more likely to be resistant to online shopping. The younger generation behind them will be even more inclined to shop online. This will surely place Malls under pressure attracting the feet which they claim justifies the high rentals. As it is, Malls are pretty boring in that they all have the same offering. Online shopping offers international options, is cheaper and yes; it is convenient. My personal view is that the writing is on the wall.

What about the future of the Mall practice?

Optometry has got some built-in protection against online shopping. Providing healthcare has an element of emotional labour. Making people feel good and managing their emotions is what emotional labour is about. Clinically, there are many procedures that can’t be done properly online. In my view, the service component of optometry is not going to be over-run by the internet anytime soon.

But here is the thing; if the Mall customers start to dry up, what reason remains to be located in a Mall? After all, the primary motive for signing a lease in a Mall was to be exposed to high consumer traffic. Given what we know so far, serious consideration should be given to relocating to stand-alone premises. In most American states, the norm for professionals is stand-alone premises. Locally, a lesson can be taken from Vets and Chiropractors whom, as a rule, have stand-alone premises.

One would imagine that after ten years in a Mall, an optometrist’s patients would come to her because of the relationship and good work and not because of the location. Relocating may be scary, but there is much comfort to be found in the fact that you have a patient record base, which allows communication. The ideal optometric practice set-up must be in your own premises. Just think of the additional income, once the bond  has been settled and you are rent free! Will Malls reach their sell-by date? Given that some of the biggest companies in the world are online traders, one would be inclined to think so. Tencent, Amazon, Alibaba, JD.Com, eBay are all massive global businesses. My prediction is that Malls will at the very least lose their status as the primary shopping locations in South Africa.

However, apart from the problems Malls are likely to face in the future, there are so many clear benefits for optometrists not to be in a hostage situation in a Mall. Relocating from a Mall is a challenging exercise, which requires careful planning over time, but the rewards will make it well worth it. 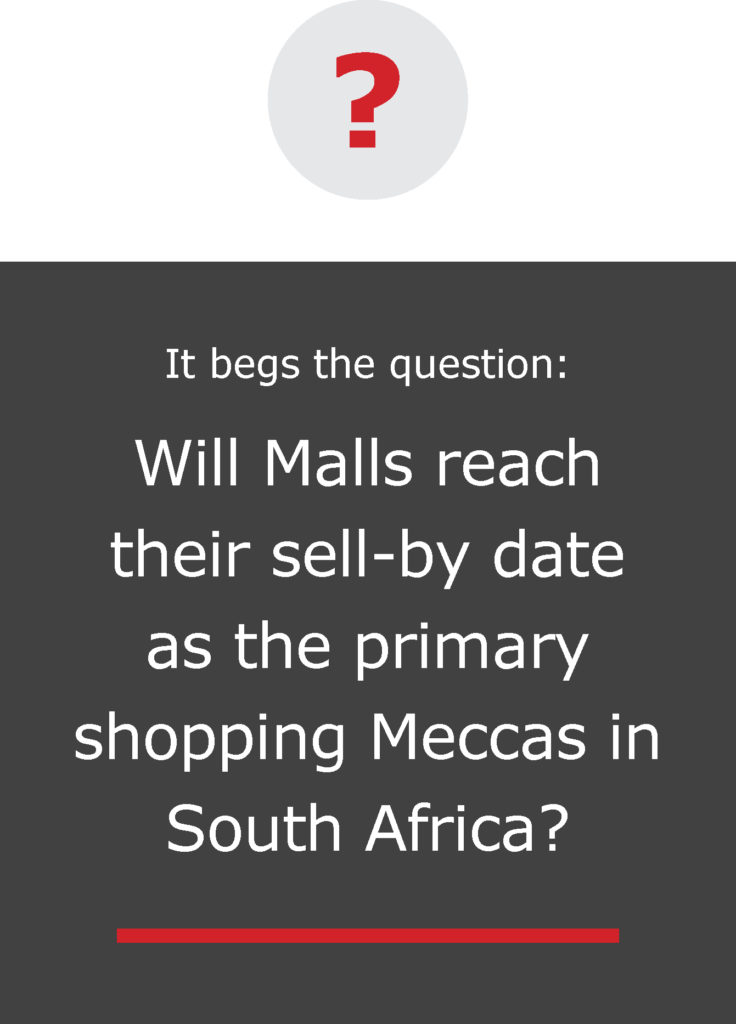